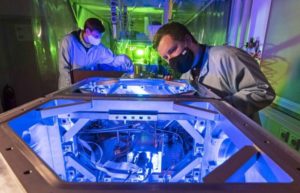 From fusion dynamics in stars, to terrestrial lightning events, to new prospects of energy production or novel light sources, hot dense plasmas are of importance for an array of physical phenomena. Due to a plethora of correlations in highly excited matter, direct probing of isolated dynamics remains challenging. Here, the 32.8-nm emission of a high-harmonic seeded laser-plasma amplifier (LPA), using eight-fold ionized Krypton as gain medium, is ptychographically imaged in longitudinal direction in the extreme ultraviolet (XUV). In excellent agreement with ab initio spatio-temporal Maxwell-Bloch simulations, an overionization of krypton due to nonlinear laser-plasma interactions is observed. This constitutes the first experimental observation of the laser ion abundance reshaping a laser plasma amplifier. The findings have direct implications for upscaling plasma-based XUV and X-ray sources and allow modeling light-plasma interactions in extreme conditions, similar to those of the early times of the universe, with direct experimental verification.
Our paper appeared in Nature’s Light: Science & Applications:
https://www.nature.com/articles/s41377-020-00424-2
The photo shows PhD students Frederik and Tobias from the Spielmann Group at Jena University with the experimental apparatus used for the experiments. The chambers and a bit older version were built by Michael back during his own PhD.