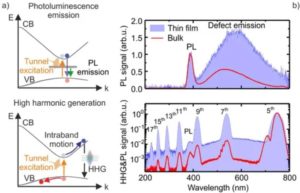 The generation of high order harmonics from femtosecond mid-IR laser pulses in ZnO has shown great potential to reveal new insight into the ultrafast electron dynamics on a few femtosecond timescale. In this collaborative work between groups from Jena University, TU Vienna and UC Berkeley, we report on the experimental investigation of photoluminescence and high-order harmonic generation (HHG) in a ZnO single crystal and polycrystalline thin film irradiated with intense femtosecond mid-IR laser pulses. The ellipticity dependence of the HHG process is experimentally studied up to the 17th harmonic order for various driving laser wavelengths in the spectral range 3–4 µm. Interband Zener tunneling is found to exhibit a significant excitation efficiency drop for circularly polarized strong-field pump pulses. For higher harmonics with energies larger than the bandgap, the measured ellipticity dependence can be quantitatively described by numerical simulations based on the density matrix equations. The ellipticity dependence of the below and above ZnO band gap harmonics as a function of the laser wavelength provides an efficient method for distinguishing the dominant HHG mechanism for different harmonic orders.
Our paper appeared in Nanomaterials:
https://www.mdpi.com/2079-4991/11/1/4