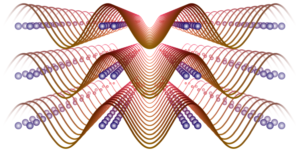 We are very excited about this work being published with Alfred as shared-first author!

An excitonic insulator is an elusive state of matter that emerges following the Bose-Einstein condensation of excitons. 1T‑TiSe2 is one of very few candidates for an excitonic insulator, but its excitonic condensation occurs concurrently with a charge-density-wave (CDW) transition, sharing the same critical temperature of ~200 K. The relationship between excitonic correlation and CDW instability hence remains controversial. The question on which mechanism drives the phase transition has slipped into a chicken-and-egg problem despite more than forty years of debate.

A global team of researchers in China and the U.S. tackled this impasse by studying how the competing excitonic and CDW ground states responds to perturbation by a femtosecond laser pulse. The key finding is that photoexcitation turns an originally three-dimensional CDW transiently into a two-dimensional CDW. Importantly, this dimension reduction does not occur unless bound pairs of electrons and holes are broken, suggesting that excitonic correlations maintain the out-of-plane CDW coherence. These findings not only shed new light on the role of excitonic correlation in 1T‑TiSe2, but also demonstrate how optical manipulation of electronic interaction enables controlling the dimensionality of broken-symmetry order. These findings pave the way for realizing other emergent states in strongly correlated systems.